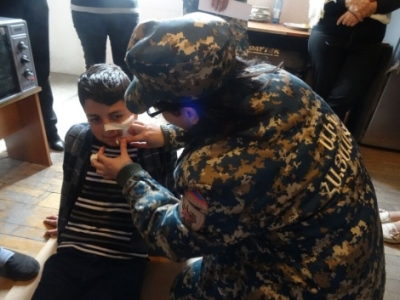 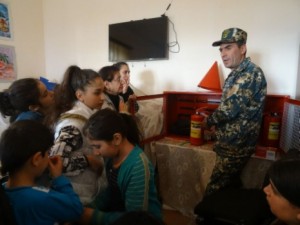 Representatives of the Ministry of Emergency Situations of Armenia held a regular training at "St Marianeh" social center, supported by WCC Armenia Round Table foundation, on the necessary actions to be taken during the fires.  The topic presented was of great interest, as everyone understands that no one is insured against such danger. Besides, recently times emergency situations are quite common in many countries of the world; Armenia is not an exception. Every wrong action in emergency situation can have irreversible consequences.

The Rescue Department of Aragatsotn Marz staff, Paramedic Nvard Ohanian and Captain Hrant Muradyan conducted training at the "St. Marian" social center on the first aid, for to the "victims" during emergency situations.

A scenario was developed that implied an emergency situation in the Centre, to be resulted in the evacuation. And then, as a result of panic, there would be two injured children.

The trainers provided first aid to the victims. After bandaging the “victims” and providing with necessary support, Aragatsotn marz rescue squad arrived and announced alarm and began evacuation. Later the rescuers showed how to take out and help the “victims”. 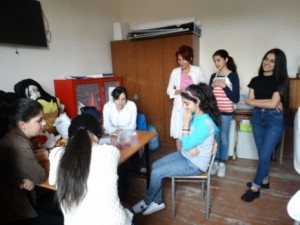 In the end, the representative of the Ministry of Emergency Situations demonstrated the methods of application of anti-fire stand equipment.  The UMCOR Armenia Foundation provided equipment to the "St. Marianeh" social center, which is needed during fire: fire extinguishers, first-aid medications, monometers and other essential supplies. 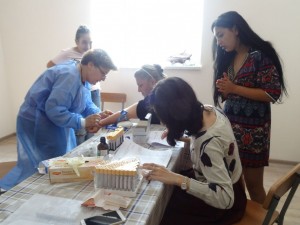 30 beneficiary women, children and St. Marianeh centre staff took part in a pilgrimage to Vayots Dzor. Most of the participants visited these places for the first time.

The first stop was Khor Virap, where the history of this church and miracles of St. Gregory the Illuminator were presented.

After requesting Gregory the Illuminator\s blessing, the pilgrims went to Areni, where the annual traditional wine festival was held. Areni is famous for its vast vineyards and is characterized by the diversity of wine. For the center beneficiaries it was very interesting to see and participate in Areni wine festival, compare it with the wine festival held in Ashtarak for the first time this year, where "Saint Mariane" Centre took part in an exhibition.

After attending the festival the pilgrims travelled to Noravank. There they learnt the history of the monastery, and prayed together.

During the pilgrimage it was planned to carry out an environmental campaign to clean the selected areas from garbage, for which gloves and plastic bags were brought. On the way back, two areas were cleaned of plastic bags, bottles, glass, and other garbage.