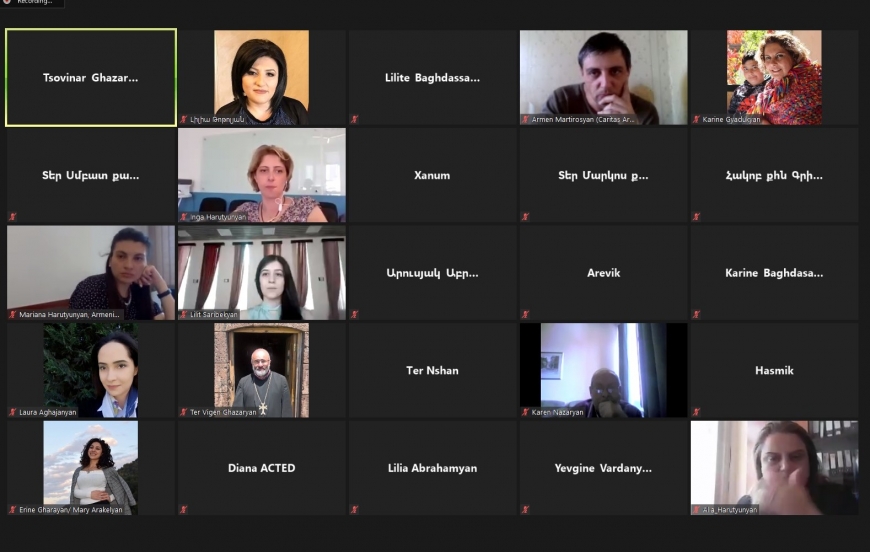 In his opening remarks, Karen Nazaryan, Director of the Round Table Foundation, presented the volume of the assistance provided to displaced people from Artsakh during 2020-2021. Mr. Nazaryan emphasized: "The total number of beneficiaries within the Artsakh program, that is implemented from 2020 to 2021, is currently 9,861 people. The budget of the program to support the people of Artsakh is 369,250,000 AMD. Parallel to the current programs, providing assistance to the victims of the tragedy of the Second Artsakh War will be the main and continuous direction of the Armenia Round Table Foundation's activities of this year".

Tsovinar Ghazaryan, WCC Armenia Round Table Foundation Program Manager, presented the results of the foundation's mapping. The speakers were Fr. Markos Mangasaryan - Director of the social service office of the Mother See of Holy Etchmiadzin, Karine Gyadukyan - Manager of the Gyumri Social-Educational Center of the Shirak Diocese of the Armenian Apostolic Church, Lilit Saribekyan - Monitoring and Evaluation Specialist of the "Man in Need" NGO, representatives of the Association of Social Workers of Armenia, Sarkis Dolmajyan - Head of ACTED Armenia Office, Alla Harutyunyan -Vice President of "Mission Armenia", Inga Harutyunyan - World Vision Armenia representative. They presented the results of their social work with the people affected by the Karabakh conflict, their findings, their advice, as well as their visions for the development program.

Fr. Mrkos mentioned the lack of social workers in the communities as an urgent issue and also stressed the lack of a unified support base. "In 4 centers about 800 people have been provided with shelter: at least 2 weeks and 5-6 months maximum. Since November, by the order of His Holiness, the Artsakh Support Committee has been established, which has provided gifts to 18,000 children in Armenia and Artsakh within the framework of about $ 230,000. More than 700 families received food and hygiene kits under the same commission program. At present, one-off assistance of 200,000 AMD is provided to families with 4 or more minor children, displaced from the territories handed over of Artsakh, and in Artsakh and in Armenia", noted Fr. Markos.

Karine Gyadukyan informed that the Social-Educational Center of the AAC Shirak Diocese has been involved in support programs since the second week of the Artsakh war in 2020. She referred to the program dedicated to the support of the victims of the war under the auspices of the ART, which is implemented in Shirak, Tavush, Gegharkunik, Lori and Kotayk marzes with the functions of social-psychological support, needs assessment, case management.

Lilit Saribekyan informed that from the very first days of the Artsakh war in 2020, the "People in Need" NGO has been providing support activities, the funds of which were from the Czech Republic, as the headquarters of the NGO is located in the Czech Republic. Assistance was provided in a number of areas.

Mira Antonyan's two assistants presented the programs initiated by the Association of Social Workers of Armenia after the war.

Sarkis Dolmajyan and Program Manager of ACTED Armenia Office presented the direction of their field of activity. The WCC ART is also involved in the eco program. It is planned to carry out voucher activities in Tavush, Lori, Shirak, Kotayk and Gegharkunik marzes. 4,100 beneficiaries must receive supermarket vouchers.

Inga Harutyunyan referred to the program "Implementation of monitoring of the services provided to families from Artsakh", within the framework of which World Vision will create mechanisms for direct monitoring and control of displaced persons.

Evgine Vardanyan, Advisor of the RA Ministry of Labor and Social Affairs, presented the planned state support measures, their continuation, the mechanisms of dialogue and cooperation with the state. At first Mrs. Vardanyan stressed the issue of coordination, as the names and locations of existing organizations are not clear. Announcing that this is a state-level problem, the Ministry of Labor and Social Affairs should take steps to address coordination issues, and one of the best options for mapping are meetings like the one convened by the Round Table Foundation.

The next working meeting is scheduled for June 16 at the Gyumri Social Center.